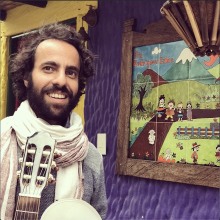 *Please note, all performances and dates are tentative and subject to change

Born and raised in Jerusalem, Israel, Lior Ben-Hur is a performing artist, music composer, director and award-winning educator
Lior earned his Bachelor of Arts Degree from San Francisco State University in the World Music program. Having a love and passion for music and world cultures, he is constantly traveling around the globe learning new musical traditions.
In addition to performing, Lior is an educator and in 2013, Lior won the national Grinspoon-Steinhard t Award for Excellence in Jewish Education for his new, innovative methods of integrating music as part of the educational experience.
Since 2004, Lior has made his home in San Francisco, CA. He formed this band in 2011, which in 2012 released an eclectic World music album under the name Sol Tevél. The album sheds new light with contemporary interpretations of old Jewish texts, ideals and mysticism.
In February 2017, Lior Ben-Hur and his San Francisco-based band, Sol Tevél, released a full-length album titled, So I Wander. Following the album’s release, it debuted at #14 on Billboard charts for Top Reggae Albums.