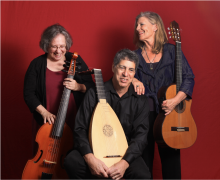 TRIO SEFARDI, a northern Virginia-based ensemble, performs traditional songs of the Sephardim, the descendants of Jews exiled from Spain in 1492. Their repertoire draws on the song traditions of Sephardic communities from the former Yugoslavia, Greece, Bulgaria, Turkey, and North Africa, with a special emphasis on traditional and original songs they learned from their mentor, Bosnian-born singer/composer and 2002 National Heritage awardee Flory Jagoda. The trio has performed extensively at prestigious East Coast concert venues, festivals, synagogues, and Jewish community centers since forming in 2010.

Members of the trio are Susan Gaeta, lead vocals, guitar; Tina Chancey, back-up vocals, viola da gamba, Renaissance violin, Pontic lyra, rebec; and Howard Bass, lute, guitar. The members combine Susan’s extensive experience with jazz and folk music, Tina and Howard’s early music background, and the influence and inspiration that Susan and Howard derived from fifteen years of working and touring extensively with Flory Jagoda. Trio Sefardi programs provide audiences with an opportunity to hear songs sung in Judeo-Espanyol (commonly known as Ladino) that have been passed down through the generations as well as newer songs composed by Flory that celebrate the memory of now-lost communities of the Balkans.

The trio has produced three CDs: Sefardic Celebration (2011), Kaminos (2016), and La Yave d’Espanya (2019). In addition to their standard programs that include songs of love and loss, holidays and hope, they offer a multi-media program about their mentor entitled “La Nona Kanta: The Remarkable Life of Flory Jagoda,” which combines filmed interviews with Flory, live music, animation, maps, still images, and spoken narration. “La Nona Kanta” is presented in conjunction with the United States Holocaust Memorial Museum. The museum’s International Outreach Office Jaime Monllor says of this program, “We believe “La Nona Kanta” will give audiences, young and old, Jews and non-Jews alike, a shining example of one person’s triumph over adversity and will lend new meaning to the on-going battles against hatred and prejudice.”