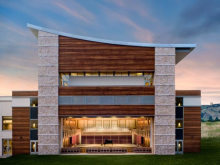 All ensemble sessions will be captured on digital video, which Fellows are free to use without conditions.

Fellows will participate in daily technique sessions, video reviews, and directed lunch conversations, and will have opportunities to work with the small and large ensembles on each of the two works under the direction of Maestro Thakar. Associates will participate fully in all activities beyond conducting the ensembles.

All sessions are held at the Green Music Center at Sonoma State University, consistently ranked as one of the most beautiful and acoustically perfect performing arts centers in the United States. Sonoma State University is in stunning Sonoma County, just minutes away from hundreds of world-class wineries, restaurants, the Pacific Coast and a myriad of outdoor adventures.

He has appeared as conductor with orchestras in Europe, Asia, and across North America, including concerts with the New York Philharmonic, the National Symphony, and some 40 other orchestras. In its 35th season, Baltimore Chamber Orchestra has performed a five-concert tour of China, and has recorded three CDs for the Naxos label, including a disc of music by Jonathan Leshnoff named to Naxos’ “Best of the Best” list. And in his 12-year tenure as Music Director of the Duluth Superior Symphony the orchestra saw dramatic growth in both audience and artistic prominence to what Minnesota Public Radio called “Minnesota’s other great orchestra.”

Thakar is a protégé of the legendary Sergiu Celibidache, and a former Fulbright Fellow, with degrees from The Juilliard School, Columbia University, and the Cincinnati College-Conservatory, with additional studies at the Curtis Institute and the Ciprian Porumbescu Conservatory in Bucharest, Romania. Other conducting studies were with Gustav Meier, Max Rudolf and Peter Perret.

Markand Thakar is the author of three seminal books. Counterpoint: Fundamentals of Music Making (Yale University Press), also issued in Italian and Czech, uses species counterpoint to promote an understanding of how both composer and performer contribute to the experience of musical beauty. Looking for the “Harp” Quartet; An Investigation into Musical Beauty (University of Rochester Press, 2011) is a study of musical beauty from the standpoint of the composer, performer and listener. And On the Principles and Practice of Conducting (University of Rochester Press, 2016) is a manual for conductors at all levels. http://www.markandthakar.com/

1 unit of college credit is available for an additional fee. Please contact Dr. Alexander Kahn, kahnale@sonoma.edu, for details if interested.

How to Register
To register for the event, please click here https://forms.gle/tKq8LKFj6WkqiuPA7. Participants will be accepted on a first-come-first-served basis. Registration will be considered complete on receipt of payment. Registration closes on December 1, 2019.

Housing
On-campus housing is not available. Recommended hotels in the area are Oxford Suites and the Doubletree Hilton in Rohnert Park. There are also many rentals in the area available through airbnb. Parking passes for the Sonoma State campus will be provided for all participants.

What people are saying about studying with Maestro Thakar:
“Markand gave me a view of conducting that came from the music and a technique that enables me to be free - which enables me to connect with the orchestral sound - in other words, as he often said, to ‘become the music’! And I still do his exercises almost every day.”
Ken Lam
Music Director, Charleston Symphony Orchestra and Illinois Symphony Orchestra
Grand Prize Winner, 2011 Memphis International Conducting Competition
Resident Conductor, Brevard Music Festival
former Assistant Conductor, Cincinnati Symphony Orchestra

“It opened my ears to a whole new world of sound and listening. It was hard, but worth it...this is a fantastic course with a world-class teacher.”
Chelsea Tipton
Music Director
The Symphony of Southeast Texas
Principal Pops Conductor, New Haven Symphony

“It was the first time I have ever been moved by my own conducting.”
Dana Sadava
Artistic Director, Pasadena Opera
Music Director, Community Women's Orchestra (Oakland)
Assistant Conductor, Indianapolis Opera

"Markand Thakar's passionate and thoughtful approach to music-making continues to be an important part of who I am as a musician. Through understanding and explaining the fundamental components of music, he builds musical works from the ground up, as they should be. I am very grateful to have had his musical guidance to help me find, in his words, 'the music inside me.' I owe him a lot.”
Tomasz Golka
Music Director, Riverside (CA) Symphony Orchestra
Grand Prize Winner, 2003 Eduardo Mata International Conducting Competition